The material presented here has been gathered from various sources. The majority of the history has been attributed to the association with major works comprised for the Golden Jubilee (1976) and the 75th Anniversary (2001) by Ken Rodgers LM and Ray Eve LM. Additional material has been added by Scott Irvine from 2015 to the present day. Contributions to this work are referenced where possible.

Referees Headquarters
For various reasons the BRLRA headquarters has moved from place to place:

The association from 1935 held their meetings at a room in Boundary Street, Fortitude Valley. The Brisbane Rugby League in 1959 offered the use of the mobile area that was used by Wests as their dressing room1. The move at the time was seen as temporary as the Queensland Rugby League wanted the area to be developed. During 1973 a suggestion was made by the Treasurer Danny Moran LM that a meeting room could be constructed over the southern entry gates. The idea was communicated to a member of the the Land Park Trust, but the idea was not carried out. The mobile shed was moved to the corner of Caxton and Castlemaine Streets, which served as a parking area for the grounds. Later on, the senior conference room was used. The room itself was becoming too small for the weekly Monday meetings1.

Ray Wilson LM (Secretary of the time) always had passed the Caledonian Club every night on his way home from work and one day noticed in the newspaper that the club was in financial trouble. On this news, Ray met with the Chieftain of the club to discuss the prospect of moving in on Monday nights for the Monday meetings. The idea was supported and was soon approved. Despite the problems of referees being forced to travel to two places on Monday nights (Judiciary was held at Lang Park), the league soon acknowledged that a permanent move was the best solution due to the space problem1.

In 2013 the main building, comprising of the conference and meeting rooms was named the “Tony McGrath Complex” in memorial of the tragic death of the then President and Life Member of the Association.

The Logo and Badges

The Association has had five logos. Before 1949, the QRL logo was used.

From 1949 to 1982 a red poinsettia logo design was used with the words Brisbane Division.

After the association was incorporated, the Q design was implemented and was used till 2000. 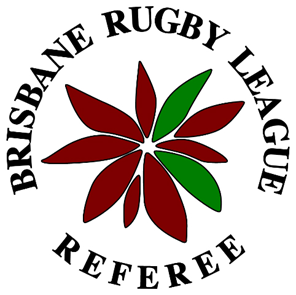 After the 75th anniversary, a circular logo was adopted being the red poinsettia surrounded by the words “Brisbane Rugby League". The same logo was adapted by Rugby League Brisbane in 2017. 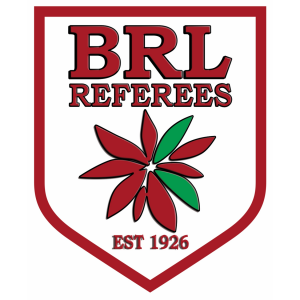 In 2017 the logo was adapted returning to a simple badge outline common with the NRL at the time, but with words "BRL Referees". For the first time the year of foundation was added. The straight edge of the top shield was to make the shield unique and to comply with the potential copyright of the National Rugby League shield design. Soon afterwards the BRL adapted the previous design into their organization. The ...
The field badges in many cases reflected the Association logo although the QRL Referees’ insignia replaced individual Association badges from 1983.

Up until the year 1949 the QRL Referees' Badge was worn, but in that year the QRL ruled that each District League strike its own Referees Badge. The Association’s first badge was a shield with a poinsettia in the center.

The second badge which was a red poinsettia inside a Q with the words “Brisbane Division” above the flower and the word “Referee” below. The badge pictured was the QRL Referees' Badge of the same period.

In the mid 1980’s the QRL Referees’ badge was used, with a cloth QRL logo on the left.

The final design of the QRL Referees' Badge as of 1989. With the advert of cloth badges and jersey screen printing, metal badges were progressively withdrawn.

This badge featured the distinctive stork and baby logo

Another BJRL referee stork and baby badge, in use until the late 1990's.

This badge was worn by new referees who are in the process of gaining Level 1 accreditation when the National Referee Accreditation Scheme was implemented in 1993.

This badge was worn by referees who gained Level 1 accreditation under NRAS.

The level 3 accreditation was gained by field experience of 100 first grade games and passing an advanced rule examination.

The Queensland Rugby League Referees’ Board, currently known as the Referee Advisory Board issues 15 year and 25 year service badges.

The former Brisbane Junior Division Rugby League Referees Association produced a dress badge, with the Division’s logo being a stork carrying an infant.

The Association presents special badges to members – for Life Members and for members giving 10, 20, 30 or 40 years service to the Association.

Special lapel badge for the 50 year Jubilee issued in 1976.

Special lapel badge for the 75th Anniversary issued in 2001.

Over the years, the Association has organised a Christmas Tree function for the wives and children of members and these have been held at various venues including Lone Pine, Mandalay, Bundaleer Park, the Australian Woolshed, Scarborough, Horizon Park, Wet n’ Wild and the Tallebudgera Fitness Camp.

Races for children in their age groups, throwing the broom for women and the Referees 100 yard championship were always held. Football matches against Toowoomba Referees for the Bulimba Cup and cricket games against Rockhampton Referees always held great interest.

The annual after-season smoko for referees only was until 1967 at such places as the Hamilton Town Hall, Bulimba and Kangaroo Point Schools of Arts, Newmarket Memorial Hall, and Kurilpa Hall at West End. Referees wives were entertained with Theatre Parties at His/Her Majesties Theatre and Old Timer dances at the Railway Institute Hall in Edward Street. 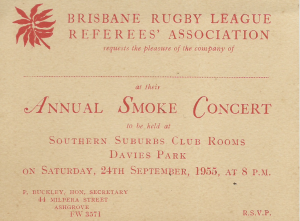 The Annual Dinner Dance was introduced in 1968 for the wives and girlfriends of referees and over the years these have been held at various venues around Brisbane including most League Clubs, the Broncos Leagues Club, ‘Gabba Cricket Ground, Parkroyal Hotel, ‘Gabba Greyhound Club and the Italian Club.

The 75th Anniversary Committee – Les Sainsbury LM
The 75th Anniversary committee was appointed on the 20th March 2000. The committee met monthly to make recommendations to the management committee for the celebration of our referees’ association’s seventy-five years in 2001, climaxing with the anniversary dinner on the 7th July 2001. The committee proved to have expertise in many fields. After a design was agreed upon Ron Daley LM was the one who saw the minting of the badge, while Harry Dearness LM , who is very knowledgeable on embroidery, teamed up with Ron to prepare the banner. Mark Flanagan, who has many resources, not only provided expert advice but also had the history of our association processed. Some material appeared easy, like the gathering of refereeing videos; Geoff Mines LM in his quiet way found it challenging but he was rewarded for his efforts. A great effort was made by Ken Rodgers in preparing the history of the association – hours of research, writing and rewriting led to the book available tonight. Ken was disappointed in the lack of memorabilia. The venue, the dinner and the accommodation were in the capable hands of Mick Smith who canvassed venues and prices to make the night a memorable occasion. The quiet achiever, Brendan Wood, became our publicity officer and once he was up and running, the news was spread by fliers, email, radio, phone and any other media to which he had access.

I thank the members for their contribution in time and effort and their input towards the celebration of the 75th Anniversary of the Brisbane Rugby League Referees’ Association.

The Early Grounds
Referees travel to various grounds these days with little trouble; but in the early days, many of the then Clubs had a bad habit of chasing Referees home armed with palings pulled from the fences. For protection, Eric Campbell always carried a water pistol with him and Les Sharp – a Prison Warden, a truncheon. The early grounds were New Farm Park, Albion Flats, Exhibition Grounds No’s 1 & 2, Gilbert Park, Thompson Estate, Pinkenba Oval, Desham Park, Nundah Oval, Bulimba Park, Moore Park No.1, Toowong Park, Kalinga Park and Ballymore Park.

The Stewards
The BRL Stewards were directly appointed by the League with the exception of the referees steward who was selected by the association as required. Generally, members who were no longer active were selected for these positions. The role consisted of duties such as:

Obtaining match cards and official program;
Check footballs (3) for inflation and check use of only current sponsored balls;
Distribute match cards to team managers;
Ascertain that referee and touch judges are in attendance;
Check ball persons and their understanding of their duties and their presentation;
Prior to game check players’ numbers as per program;
Check safety conditions of players’ boots, fingernails, rings etc;
Locate Appointment Official in case of non-appearance of Referee or other relevant matters;
In the event of a Referee not showing, the two captains are called to select a referee from available touch judges;
Fifteen minutes prior to game, notify PA of program changes;
Assemble captains for toss before kick off and inform referee who won toss;
Five minutes before kick off inform team officials of such;
At 2 minutes and 1 minute to start, respectively, request teams and then referee to make way to field;
Monitor and remind ‘on field’ trainers, no scissors or sharp objects to be taken on field;
In the event of a send off, collect charge card for team manager of player involved and;
In the event of any alleged damage or breaches of Code of Conduct brought to the attention of the Steward, he is to convey this to the Host Club Chief Executive and forward a written report to the Divisional Officer at his earliest convenience.

However, as Ron Daley LM recalled, the referees were supported by Stewards at Lang Park and these fine gentlemen wore crisply ironed white lab coats and chaperoned us and the teams on and off the field. If that wasn’t enough the Stewards also took great pleasure in dunking you with iced water as you showered after the game.

Other Points of Interest
Ray Eve LM and Len Jacobson LM served the Association for over 50 years. It was noted in the 1976, that Ray Eve LM served 48 years out of the 50 years of the association’s history. Len Jacobson awarded OAM in 1990 for services to Rugby League. Col Wright played for Queensland and was also Captain.

The following members have served in Queensland Parliament: 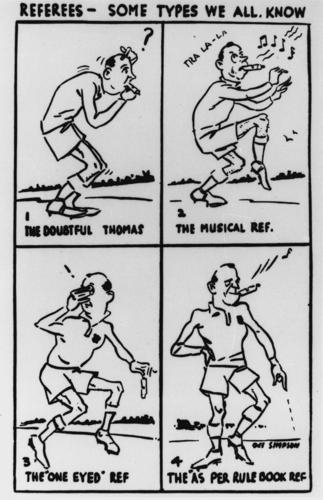 Rule Changes
Did you know the distance the defending team had to retire from the play the ball has been changed a number of times? Our game has had the one metre rule, the three metre rule, the five metre rule, and now we have the ten metre rule. The game as we know it today has undergone many changes to the game the referees and players were involved well before some of us came on the scene3. 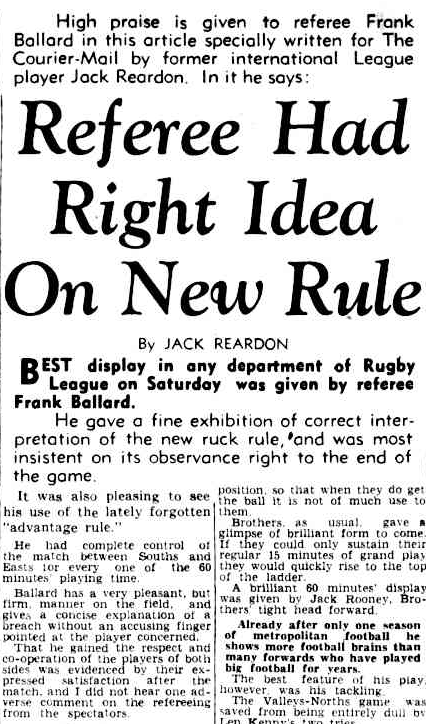 Listed below are some of the changes to the International Game4 where applicable in Brisbane, not showing the various changes to interchange or rules that no longer exist i.e points for making marks.

Issues registering for 2020?
Please view this short video on how to do it.
www.youtube.com/watch?v=JOiKe2_L9Vc

If issues persist please lodge a help ticket before contacting the association.
support.playrugbyleague.com/hc/en-us/requests/new

Once you have your NRL Account please proceed to:
brlrefs.com.au/registration/ ... See MoreSee Less

How to register in MySideline!

Online registrations are now open for the 2020 Rugby League season via the NRL’s new MySideline system. Whether you are re-registering from previous seasons,...