Bigger than the Game?

The 1960 season was over shadowed by a riot that occurred at Oxenham Park, Nundah, then the home grounds of Norths 1.
Norths were playing Wests, with Don Lancashire making a huge call near the end, which handed Wests the game. The score was 7-7 when Lancashire penalised a Norths’ player for making a tackle from an off-side position. Wests missed with his first shot at goal, but Lancashire gave him a second go because Wests’ players were walking backwards and forwards under the posts trying to distract him.

Back in the dressing rooms Don needed police protection as fans milled around hurling abuse. “I still had NSW number plates on my car,” Lancashire said. “The cops told me to get in the car and go.”
The following week Lancashire was awarded the match of the day between Valleys and Wynnum, and finished with broken ribs from a collision with one of the players 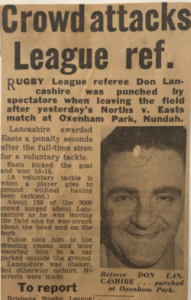 The news of the day
Don Lancashire collection
A threatened strike in 1960 was averted when the referees’ again objected to the Appointment Board by passing a notice of No Confidence in the three members of the board from the BRL but excepting the two Referees’ Association Members Les Sharp and Ian Marr. The League acted quickly by meeting the Management Committee and the matter was settled and the Board reduced to three members – two from the League and one from the Referees’ Association. 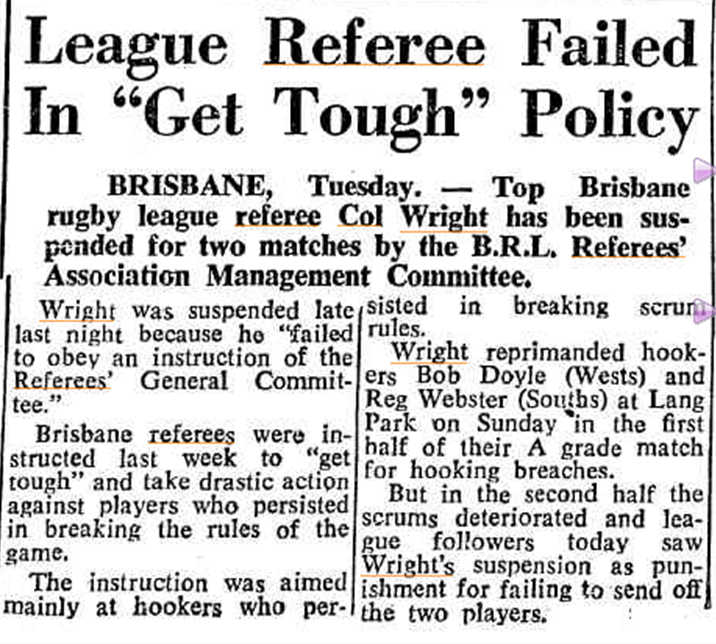 The decisions of the BRLRA were constantly reported.
Canberra Times 7th August 1963.
During 1964 the association was in dispute with the league judiciary and directed its members not to attend any judiciary hearings as a sign of protect. Even to the point of suspending Don Lancashire when he attended a hearing just days before his appointment to the Queensland v New South Wales interstate series. Don appealed to the Brisbane Rugby League who upheld the suspension 2

The next dispute occurred in 1968 when Dale Coogan dismissed player Barry Muir (a former Australian International) from the field at Lang Park. Muir was charged on three counts:

The Judiciary suspended the player for twelve months. The Association’s reaction was to refuse to referee any game in which this player took part, once his suspension had been served. The decision was never carried out in Brisbane fixtures, but was applied to QRL trial games. On his return to Brisbane the ban was lifted. 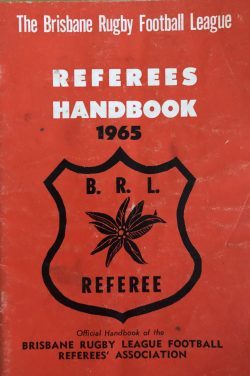 The cover of the 1965 BRLRA Handbook – containing the specific BRL procedures and a rule quiz.

I remain as passionate about the game now as I was when I first joined the Association back in 1964. Many things have changed over the fifty years that I have been a member. When I first got involved the game was very different.

Not so much about the rules but more in the role that the game played in bringing the community together as the local team played at the local ground. With no pay TV and only the Sunday match of the day covered on the radio and ABC TV, the only way to stay in touch with your team was to go to the game. We regularly officiated games in front of sell-out crowds that were not backwards in coming forward to let you know if you made a mistake. Rest assured that a crowd of 8,000 parochial fans can be far more critical than 10 different camera angles!

The game developed a loyal following and referees, dressed in all white and starched uniforms, were treated by players with deference. There was none of that familiarity to you see today. Players were referred to by the number on their back and the referee by a simple “sir”. The game had real characters that followed their teams wherever they went and whether they won or lost. Nothing could dampen their loyalty to their team. Characters such as Valley’s “Happy Jack” or the famous “Geoffrey” who would be at every Panther’s games complete with cardboard placards adorned with newspaper clippings recording their long past victories.

It was into this context that I first decided to “blow the whistle”. In my early years of service, the Association met weekly during the season on Monday nights in a meeting space under the old Frank Burke Stand that was at the Western side of Lang Park. Senior referees would present lectures and a failure to attend would be quickly followed by a “please explain” phone call from a member of the executive. In those days full commitment was expected from all members of the Association.

The highest level I achieved was ‘A Grade’. My promotion to first grade was not the traditional path. I was carrying the flag as touch judge in an ‘A Grade’ match, something that was a responsibility of referees from earlier games. It was usual for you to be appointed to lower grades earlier in the day and then must back up carrying either the blue or red flag in ‘A Grade’ from 3 PM. On the day of my opportunity the appointed ‘A Grade’ referee and was unable to continue his duties for the second half. The representative to the Appointment Board at the ground approached me to replace him for the second half. While it wasn’t a traditional path to the top, it was one that I grabbed with both hands. I was subsequently appointed to more ‘A Grade’ matches.

I was an active referee for ten years, 1964 – 74, with the highlight point being appointed as the referee for the reserve grade grand final in 1973. I will never forget that feeling of running onto the field with Lang Park filled with a capacity crowd. In those days, Lang Park had a manual scoreboard and was largely a sandy surface due to the heavy use throughout the year. Back then beer was served in cans and a bad review from the crowd was on occasion reflected by patrons offering to share their beverages with you as you left the field. Feeling that I had achieved all I could have achieved as a referee, I decided to retire from “active duty” at the end of the ’74 season.

This wasn’t the end of my involvement with the Association. I continued with selection to the referee’s appointment Board. I retired from the Board following a successful stint as Chairman. My family was very patient during this time as it meant spending both Saturday and Sunday watching fixtures in all three grades. This was followed by the Board’s meeting to discuss appointments for the following week. Because of this service to the Association I was honoured with Life Membership in 1977. While my participation has declined in recent years this recognition of my service to the Association is still very special to me.

A certain amount of time has always been set aside during meetings for lectures on the laws of the game to members. This lecture was delivered by the appointed lecturer. This position was removed in 1970 when the new examinations set up was inaugurated to the Chairman of the Examination Board or one the board members. The Examination Board has been in existence since the formation of the association. A person first joining the association would be handed a rule book, sent away to learn the rules and then would be examined by the Board. Likewise in 1970 this Board was formed and now the member at least six to eight weeks instruction before being examined. On passing this the person then sat for the practical examination which is the actual handling of a rugby league match.

In the years between 1968 and 1978 the uniform of the BRLRA was the white cotton wool jersey, starched white shorts that could stand up on their own accord, maroon socks and black football boots with white tape laces that wrapped around the ankles and under the boot3. The referee’s badge was a metal base which a white background and a poinsettia symbol held by a lace through the back three studs. The other most important part of the kit was the whistle, with some referees who treasured them so much that that they had little gold or silver boxes for storage3. The Acme Thunderer was the whistle of choice. 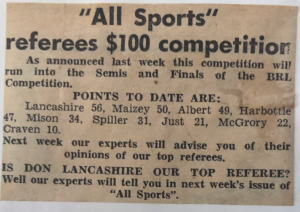 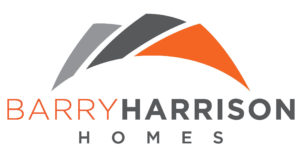